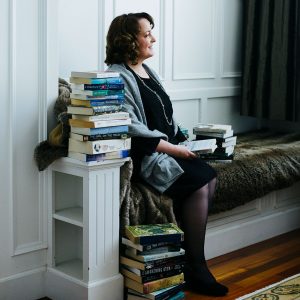 Although I can bumble my way through basic Dutch to help with grocery shopping and rudimentary French to order from the menu in a Parisian bistro, I am fluent in only one language. I admire those who easily flit from one language to another in everyday conversation. I am in awe of those who translate fiction and their ability to capture the nuances of emotions and colloquialisms that make each character distinct.

Without the talented work of translators, my bookshelves would be limited to novels written in their original English. Tolstoy and Dostoevsky would be absent. So, too, would the Spanish-language authors Allende, Márquez and Zafón, and the numerous Nordic Noir writers I admire. Also missing would be such favourites as Franz Kafka’s Metamorphosis, Émile Zola’s Nana and Han Kang’s The Vegetarian.

“Translating is an act of mediation between cultures,” said Patrick Hanan, a Sinologist at Harvard, in his essay about the translation of Western fiction into Chinese. The word mediation suggests the act of translation requires negotiation to achieve a balance between two languages.

No two languages, with all their intricate subtleties, can be translated word-for-word and spontaneously capture the same meaning. The translator must use their knowledge of both languages to finesse each sentence to preserve the original intentions of the author.

Michele Hutchison, joint winner of the 2020 International Booker Prize for her translation of The Discomfort of Evening by Dutch author Marieke Lucas Rijneveld, said that translation is always a matter of interpretation. “It’s like acting,” she said. “Which accents do you bring to a text? Which elements are you drawn to, and what gets emphasised consciously or not in your version?”

Ted Hodgkinson, chair of the judging panel for the 2020 International Booker Prize, recognises the important role played by the translator in engaging the reader and drawing them into the author’s creation. “A good translation captures the idiosyncrasies of the original novel without being slavishly literal,” says Hodgkinson. “It enters into the creative spirit of the author’s vision.”

A huge amount of effort is required to translate a novel from its original language into another language. My novel, The Engraver, is currently being translated from English into Dutch. I am fascinated by the translator’s process and the detail involved in capturing the nuances. For example, deciding whether to use formal or informal pronouns is not something an author considers when writing in modern English, but it needs to be considered for Dutch. The translator and I discussed the pronouns to be used between each of the characters, and how these may change as their relationships developed.

Now that my novel is being translated, I’ve been thinking more about the benefits of reading translated fiction. We read fiction to escape into another world, to experience lives different to our own, to gain new perspectives and empathy. Our reading journey becomes even richer when we read works by authors who write in languages unfamiliar to our own. Through the author’s voice, we experience the history, culture, lifestyle, traditions, ideas and beliefs we may never have previously encountered. We discover different methods, learning that storytelling in Lebanon, for example, is different to storytelling in China. Reading translated fiction offers us a glimpse into the minds of authors and translators from different cultures, their experiences and beliefs. It opens our eyes to new possibilities.

Below is a list of translated fiction, some of which I’ve already read and some I’m planning to read in the next year. Please let me know if you have additional translated works you’d recommend.