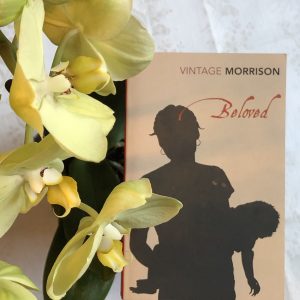 While reading Toni Morrison’s novel Beloved, I was intrigued by her repeated use of colour as a way of adding richer context to the courageous story of former slaves in post-Civil War Cincinnati. It led me on a journey to learn more about the use of symbolism in fiction writing.

Storytellers have used symbols as a literary device since the first hieroglyphs and pictures appeared on temple and cave walls thousands of years ago. Essential to the art of storytelling from ancient times to the modern day, symbols are used to communicate ideas that span the boundaries of language and culture. Writers use objects, characters, names and colours to represent abstract ideas and feelings, to imbue their stories with layers of meaning.

Symbols can add clarity to challenging or complicated text. Although I grapple with the Middle English of Chaucer’s Canterbury Tales, the text is filled with objects that clarify and enrich the story. Chirping birds, blossoming flowers and May garlands are symbolic of rebirth, spiritual renewal and the eagerness of the characters to embark on a pilgrimage.

By using symbols to express complex ideas, the need for writers to sermonise or use lengthy explanations is reduced. Symbols are a literary device that encourage writers to show rather than tell. To Kill A Mockingbird would become tedious and the young character Scout unrealistic if she began expounding on complex theories. Harper Lee’s inclusion of mockingbirds in the story provides a tangible link to the innocence of the characters Boo Radley and Tom Robinson, and the theme of innocence destroyed by evil.

Symbols are used to connect themes running through a story, and to build the emotional resonance of the characters. In Shakespeare’s Macbeth, the blood, water and contrasting light with dark are used to exemplify the themes of murder, guilt, atonement, and the fight between good and evil. Lady Macbeth’s tortured dialogue when she vainly attempts to scrub blood from her hands – Out, damned spot! out, I say! – is a masterpiece of literary symbolism.

Vivid objects are included in stories to provide deeper layers of meaning. The vibrant flowers, quilts and room interiors in Morrison’s Beloved are far more than descriptions to bring the setting to life. They are symbols of hope and freedom; in particular, the ability to recognise beauty in the world and appreciate life as not merely black and white. The repeated use of the colour red represents the psychological trauma that is the consequence of the evil and violence of slavery.

Whether symbols are deliberately or unintentionally placed within a story by their creators has been debated for years. Many critics and readers have assumed symbols existed in stories, despite writers insisting such symbolic meaning was not their intention. “Symbol-hunting is absurd,” said writer Saul Bellow after he confirmed that readers had wrongly assumed symbols were present in his novels.

Norman Mailer stated, “the best symbols in a novel are those you become aware of only after you finish the work”. Ray Bradbury said he never consciously placed symbols in his writing, saying “the best symbolism is always unsuspected and natural.” Author of Catch-22, Joseph Heller, said he intentionally relied on symbolism in his writing, “but not to the extent that many people have stated.” Novelist Ralph Waldo Ellison warned against manipulating symbols, stating “symbols which are imposed upon fiction from the outside, tend to leave the reader dissatisfied by making him aware that something extraneous is added.”

Morrison remained silent on the methodology of symbolism in her work. In 1979, while talking with students at Bryn Mawr College, she compared the writing process to being like a magician: “when you watch him on the stage you see the rabbit and the lights and the beautiful colours, but the skill is in the false bottom and the dexterity of his fingers. That’s what I teach: how to handle it so that the reader is only aware of the rabbit that comes out of the hat and doesn’t see the false bottom. That’s craft – and hard work.”

Perhaps literary symbolism is best analysed as a reading process rather than a writing process. Next time I open a novel, I’m looking forward to immersing myself in the story, enjoying the richness and magic of the language, and musing over the subtle use of symbols throughout.