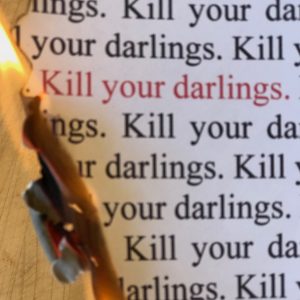 When I completed the first draft of The Engraver, I honestly believed it was pretty good. My brash opinion lasted only a few days. After I climbed down from my pedestal, I looked at the manuscript with fresh eyes and realised that no one would publish it in its current format. Drastic rewriting was necessary.

The key step to moving forwards was to follow Stephen King’s daunting command: ‘Kill your darlings, kill your darlings, even when it breaks your egocentric little scribbler’s heart, kill your darlings.’ I pressed the delete button on chapter after chapter of my carefully written story, watching it disappear into the ether. In reality, they were saved to a Deletes folder that expanded at a startling rate, and easily available for me to access during the rewriting process.

Over the coming months, as I began to rewrite The Engraver, I learnt that starting from scratch was liberating. I dissected the plot and discovered parts that were unnecessary or required greater clarity or more meat. I realised that having additional viewpoints in the modern-day timeline weakened the story and, although these characters were critical, by changing how their actions and thoughts were depicted I could build suspense and highlight the protagonist’s inner journey. I identified scenes where the pace was too slow or moments where an easing of the pace would allow more time for the character’s thoughts to be revealed.

As the rewriting continued, I became aware that nothing I had previously written for the earlier versions of The Engraver was wasted. Every piece of dialogue, scene and chapter that ended up being deleted was a valuable part of the creative journey. They allowed me to practise my craft, hone my writerly skills, polish a turn of phrase or nuance, experiment with words and sentence rhythm. They were a way of burying myself in the minds of the characters, the dark corners of every scene, the subtleties of every gesture and expression. They were a way of taking risks and stepping outside my comfort zone. Nothing was wasted.