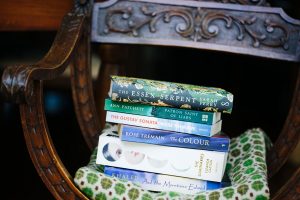 Dual narratives have always fascinated me: transitioning from one character or time period to another, an intriguing juxtaposition of language, idiom, objects and customs that describes two distinct stories and weaves them together to make a whole.

My fascination goes back to 1981 when Harold Pinter’s adaption of John Fowles’ beguiling novel The French Lieutenant’s Woman was released. The film-within-a-film storyline offered viewers a complex plot. Segueing between two love affairs – the first of Sarah and Charles in the Victorian era, the second of the two actors making a film of the Victorian protagonists – the movement between the two timeframes kept viewers seduced to the end.

The Time Traveler’s Wife by Audrey Niffengger is another intriguing dual narrative, alternating the first-person perspectives of time-traveler Henry with artist-wife Clare. It shifts backwards and forwards in time, telling two distinct stories until the timelines of the protagonists converge.

My favourite dual narrative is A.S. Byatt’s Possession, which depicts the developing relationships of two fictional nineteenth-century poets and the two modern-day academics who are researching their lives. Each narrative jump brings with it an alluring tension, the interlinked storylines feeding off one another, bringing further questions and yet weaving the common themes of ownership, control and dependence.

Writers choose dual narratives for different reasons. A writer may want to present two side of the same story, as in The Time Traveler’s Wife, for readers to experience a richer, more emotive dimension. A writer may choose to present the same character in different time periods to reveal certain personality traits and highlight the way in which the protagonist either overcomes or surrenders to the challenges in their life. Dual narratives can highlight the similarities and differences between beliefs, cultures, social classes and generations, while focusing on perennial themes such as forbidden love, survival, coming-of-age angst, adversity, prejudice, corruption or war.

A.S.Byatt’s Possession had a significant impact on my development as a writer and my use of dual narratives. My novel, The Engraver, explores the secrets that lie beneath the surface of family dynamics through the experiences of two women who live four centuries apart, and the far-reaching consequences of those secrets. The themes of loyalty, betrayal and trust are just as compelling in modern times as they were centuries ago.

While I wrote The Engraver, I studied the similarities and differences between each protagonist’s relationship with her father, focusing on their levels of trust and loyalty, dependence on their family, inner strength and personal motivation. The wall in my study was covered in yellow, blue and green sticky notes to help visualise the two storylines. In an instant, I could see the common threads and the points of divergence.

If you’re interested in reading novels with dual or multiple narratives, check out the following:

The Summer Wives by Beatriz Williams
The Alice Network by Kate Quinn
Our Endless Numbered Days by Claire Fuller
All the Light We Cannot See by Anthony Doerr
How to Be Both by Ali Smith
Instructions for a Heatwave by Maggie O’Farrell
The Things We Never Said by Susan Elliot Wright
Eleanor & Park by Rainbow Rowell
Gone Girl by Gillian Flynn
Will Grayson, Will Grayson by John Green and David Levithan
The Help by Kathryn Stockett
The Joy Luck Club by Amy Tan