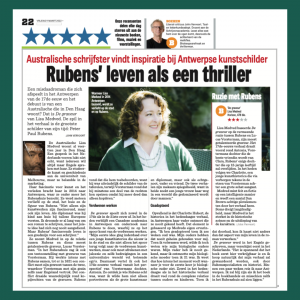 Rubens’ Life As A Thriller.

A crime novel set in 17th-century Antwerp and the debut of an Australian living in The Hague? That’s The Engraver by Lisa Medved. The pivot in the story is the greatest painter of his time: Peter Paul Rubens.

Australian Lisa Medved has lived in The Hague for fourteen years. It is not really possible to have a conversation in Dutch, because everyone always wants to speak English with her. She studied art and history at the University of Melbourne, but she ended up in marketing.

Her fascination for art and the past brought her to Antwerp in 2014, where she visited the Rubens House, among others. She immediately fell in love with the city, the house and the figure of Rubens. “Not only are his artworks fascinating, but so is his life. As a diplomat he was at home with countless European monarchs. I had long dreamed of writing a novel, but the right idea had never come up. But Rubens’ fascinating life is a gold mine for a writer.”

For example, Medved zooms in on the relationship between Rubens and his most talented engraver, Lucas Vorsterman. “I also saw an exhibition with engravings by Vorsterman in the Rubens House. He worked closely with Rubens until there must have been a conflict between the two in 1621, as a result of which Vorsterman and his family left for England. That conflict probably revolved around copyright of the engravings. Rubens thought they belonged to him, because he was ultimately the painter of the scenes, while Vorsterman thought he could claim at least part of the rights because he did more than just copy.”

Missing works
The Engraver is set in both the 17th and 21st centuries. Today, a Canadian academic stays in Antwerp to do research on Rubens, where she finds out about the missing works. “My first idea was indeed about a young art historian who is new to the city and who not only follows the trail back to the missing works of art, but also has to deal with jealousy and even threats in a university world full of clashing egos. I also tell the 17th-century story from the perspective of Vorsterman’s daughter, Antonia. In this way you discover who Rubens really was, because I wanted to portray him not only as the great artist and diplomat, but also as a husband, father and friend. The two stories are mirror images of each other, because in both stories a young woman is trying to find her way in a world dominated by men.”

Adopted
It is striking that Charlotte Hubert, the historian of the contemporary story, meets her father in Antwerp, whom she never knew. That element is based on Medved’s own experiences. “I was adopted when I was six weeks old. My parents never kept that a secret from me. When I grew up, I still wanted to know who my biological parents were. I never knew my father, but I met my biological mother when I was 21. So, I know how intense the moment feels when you see your biological parent for the first time. In both the contemporary and the historical narrative, much revolves around the complex relationships between parents and children. Once I realized that, I could hardly help but incorporate that aspect of my life into the novel.”

The Engraver was written in English, but first appears in Dutch. “It is exciting that the book is first available here and I hope that my story will be appreciated, also by Rubens’ specialists and historians. I will travel to Antwerp in a few weeks and will be happy when I see the book in bookshops and maybe even in the Rubens House.”

Quarrel with Rubens
Lisa Medved based The Engraver on the alleged quarrel between Rubens and Lucas Vorsterman, his most talented engraver. The 17th-century story mainly revolves around Antonia, Vorsterman’s daughter who becomes Clara’s best friend, Rubens’ only daughter who will die at the age of 12. In the present we follow Charlotte, a young art historian who goes after a great treasure through hidden characters in Vorsterman’s etchings.

Medved intelligently mixes fact and fiction and weaves some Dan Brown-esque plot elements throughout the story. Sometimes wordiness threatens, but Medved is strongest in the historical scenes and the depth of the characters.