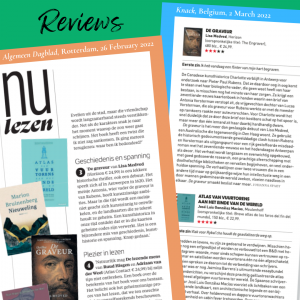 History and tension
The Engraver by Lisa Medved is a pleasant historical thriller, also a debut. It is set in Antwerp in 1620. The girl Antonia, whose father is Rubens’ engraver, has artistic ambitions. But at that time, a girl is not expected to develop artistically, and she keeps the maps she draws a secret. An art historian of our time discovers that secret codes have been incorporated into those maps. It is a special mix of history, art history and suspense. Well done.

Canadian art historian Charlotte is staying in Antwerp to research Pieter Paul Rubens. That she comes face to face with her biological father, who has no knowledge of her existence, is perhaps the least of her worries. She gets her hands on a seventeenth-century map book in which is hidden a letter from Antonia Vorsterman, the free-spirited daughter of Lucas Vorsterman, who worked as an engraver for Rubens and headed on a collision course with the master over copyright. It quickly becomes clear to Charlotte that this letter has left her on the trail of a precious treasure, but more than one person is thwarting her.

The Engraver is the more than successful debut of Lisa Medved, an Australian who now lives in The Hague. She uses the historically documented violent clash between Rubens and Vorsterman as the starting point for a richly detailed crime novel set in seventeenth-century and contemporary Antwerp. The story is built up slowly and in a balanced way, with well-dosed research, a beautiful atmosphere with maze-like libraries and dilapidated beguinages, and a lot of underlying tension. The storylines about two women who seek their intellectual path in a male-dominated world in a different time but in a similar way flow seamlessly together. The Engraver definitely leaves you wanting more.