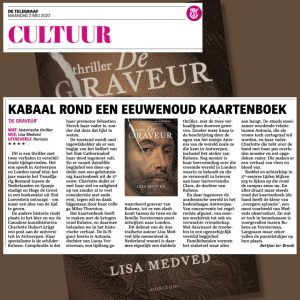 Intrigue Around An Ancient Map Book:

This is a thriller with two stories set in different time periods. One takes place in Antwerp and London from 1621: the year in which the Twelve Years’ Truce between the Netherlands and Spain ends and Hugo de Groot escapes from Loevestein Castle in a book chest – just to give you an idea of the time.

The other history takes place here and now: the Canadian art historian Charlotte Hubert gains a post at the university in Antwerp. Her specialty is the painter Rubens. The complication is that her sponsor Sébastien Sterck is her father, without the latter seeming to know.

The situation quickly becomes more complicated when a beguine from the belfry of the Sint-Catherinahof falls to her death. And from the same beguinage, a box appears with a mysterious map book from the 17th century. Charlotte pushes onwards with her heart and soul (and without too much consideration for others), reluctantly assisted by her colleague Miles Thornton.

The map book is related to those associated with Rubens, and with that we arrive in the historical story. The first person here is Antonia, daughter of Lucas Vorsterman, Rubens’s long-admired engraver, until a clash occurs between the two and the Vorsterman family moves to London.

The debut of the Australian author Lisa Medved (who currently lives in the Netherlands) is therefore actually a double thriller, with the two storylines woven together. The description through the eyes of the girl Antonia is simply beautiful of the world as she knows it in Antwerp, including Rubens’ studio. Even more beautiful is her astonishment about the strange world in London where she ends up and which she expresses in letters to her best friend Clara, Rubens’ daughter.

And opposite the academic world in contemporary Antwerp. From competitor to outright envy, from enormous workload to unexpected friendship. Next to it the turbidity in an apparently tranquil beguinage.

Family ties form the framework on which everything hangs. The increasingly difficult relationship between Antonia, who as a woman wants to become a cartographer, and her father. Charlotte worries about the bond with her recently deceased mother and newly emerged father. They make it a story of flesh and blood.

Gossip and backbiting in 17th-century times appear to be very similar to those around campus today. And everything revolves around that map book (the binding is the colour of “overcooked spinach”, a good example of Medved’s observations). And what the hell happened between Rubens and Vorsterman. Slowly but surely the puzzle pieces are falling into place.