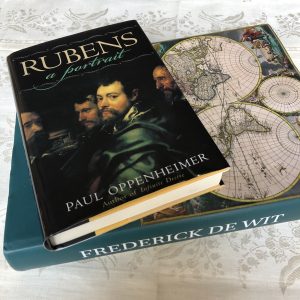 I was recently interviewed by a journalist about the release of my historical thriller The Engraver. The Dutch edition of De Graveur spins the tale of famous Baroque painter Rubens, his chief engraver Lucas Vorsterman and a stolen treasure.

When the journalist asked me about the facts behind the fictionalised story, my brain went blank. I mentioned the first time I visited the Rubenshuis and learnt about the real feud between Rubens and Vorsterman that inspired the novel, but the details of my other research momentarily disappeared from my mind.

I studied my fair share of primary and secondary sources while completing a degree in history and fine art history. My areas of study were diverse: the Indus Valley Civilisation, the Opium Wars in China, Renaissance Florence, the colonisation of New York, along with seventeenth-century landscape painting, Baroque architecture and more.

Focused Research
During the seven years I spent writing The Engraver, I put these research skills into practice (even though I momentarily forgot them while speaking to the journalist). I studied the history of seventeenth-century Flanders, customs of its citizens, the influence of the Spanish Hapsburg court in Antwerp, the tensions between Protestants and Catholics, the lives of Rubens, Vorsterman and their peers. I studied the intricate maps of cartographers Frederik De Wit and Abraham Ortelius. I learnt about goffering irons to crimp the ruffled collars worn by the well-to-do, and pattens to protect the shoes of women as they walked along muddy streets.

Blurring the Line Between Fact and Fiction
The literary genre of historical fiction blurs the lines between fact and fiction to varying degrees. If an author is over-enthusiastic in embellishing the facts behind their story, they run the risk of being criticised for being inaccurate. If an author focuses on the facts, their creation is more historical nonfiction. So, how accurate should historical fiction be? How imprecise can it be to remain historically authentic?

Every historical novel contains a foundation of fact. The facts may exist as a pervasive impression of a particular era, such as the post-American Civil War described in Toni Morrison’s Beloved or the Russian Civil War in Amor Towles’ A Gentleman in Moscow. Or the facts may exist through the fictional portrayal of historical figures, such as Johannes Vermeer in Tracy Chevalier’s Girl with a Pearl Earring or Agnus Magnúsdóttir in Hannah Kent’s Burial Rites.

Emotional Connections
Historical novelists take these facts, whether they are mere kernels or major truths, and use them to create a story. Readers are transported into a past era and immersed in the world of the characters, empathising with them, cheering them on when they reach an impasse.

For readers to be emotionally connected with the characters, the story needs to be believable. Writers need to get the details correct and show the characters involved with the historical elements. Tracy Chevalier shows the housemaid Griet grinding and mixing pigments under Vermeer’s watchful gaze. Hannah Kent shows Agnus weeding the vegetable plot and interacting with the inhabitants of the isolated farm in nineteenth-century Northern Iceland as she waits out the long winter until her execution.

Aim for Authenticity
Although historical fiction writers complete a huge amount of research for their story, often only a small amount is included. Historical facts need to be integrated subtly, with the writer choosing which details to include and which to leave out. The aim is to capture an essence of the era, not have it read like a textbook. Morrison mentions very few historical facts about the aftermath of the American Civil War in Beloved, yet her book is brimming with the heartache, horror and loss experienced by the characters.

If novelists or readers are hoping for pure accuracy in historical fiction, they will be disappointed. History is open to interpretation and full of unanswered questions. No matter how much research is completed, novelists sometimes need to make an educated guess on the historical details and move on with their story. Sometimes they need to bend the facts a little to fit the narrative. Often they need to modernise historical language so, for example, their fifteen-century dialogue can be understood by the majority of readers and not just those who have doctorates in Medieval English.

When writing historical fiction, being authentic and believable is more important than being accurate. Readers want to be immersed in the story as a silent observer within the setting, experiencing the emotions of the characters, smelling the peat smoke of the fireplace, hearing the squelch of mud, tasting the briny pop of caviar, feeling the rough slub of tweed. Give readers the truth of the story.